Performance: Calling R_CheckUserInterrupt() Every 256 Iteration is Actually Faster than Every 1,000,000 Iteration

If your native code takes more than a few seconds to finish, it is a nice courtesy to the user to check for user interrupts (Ctrl-C) once in a while, say, every 1,000 or 1,000,000 iteration. The C-level API of R provides R_CheckUserInterrupt() for this (see ‘Writing R Extensions’ for more information on this function). Here’s what the code would typically look like:

This uses the modulo operator % and tests when it is zero, which happens every 1,000 iteration. When this occurs, it calls R_CheckUserInterrupt(), which will interrupt the processing and “return to R” whenever an interrupt is detected.

Below are some benchmark statistics supporting the claim that testing / calculating ii % k == 0 is faster for $k=2^m$ (blue) than for other choices of $k$ (red). 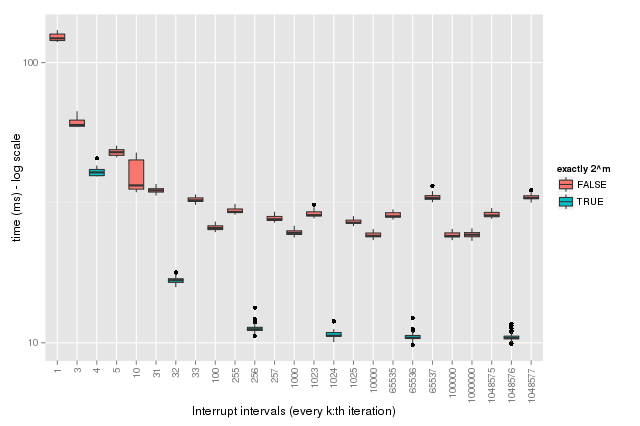 Note that the times are on the log scale (the results are also tabulated at the end of this post). Now, will it make a big difference to the overall performance of you code if you choose, say, 1,048,576 instead of 1,000,000? Probably not, but on the other hand, it does not hurt to pick an interval that is a $2^m$ integer. This observation may also be useful in algorithms that make lots of use of the modulo operator.

Details on how the benchmarking was done

I used the inline package to generate a set of C-level functions with varying interrupt intervals ($k$). I’m not passing $k$ as a parameter to these functions. Instead, I use it as a constant value so that the compiler can optimize as far as possible, but also in order to imitate how most code is written. This is why I generate multiple C functions. I benchmarked across a wide range of interval choices using the microbenchmark package. The C functions (with corresponding R functions calling them) and the corresponding benchmark expressions to be called were generated as follows:

The actual benchmarking of the 25 cases was then done by calling:

Feedback and comments are apprecated!

To reproduce these results, do: